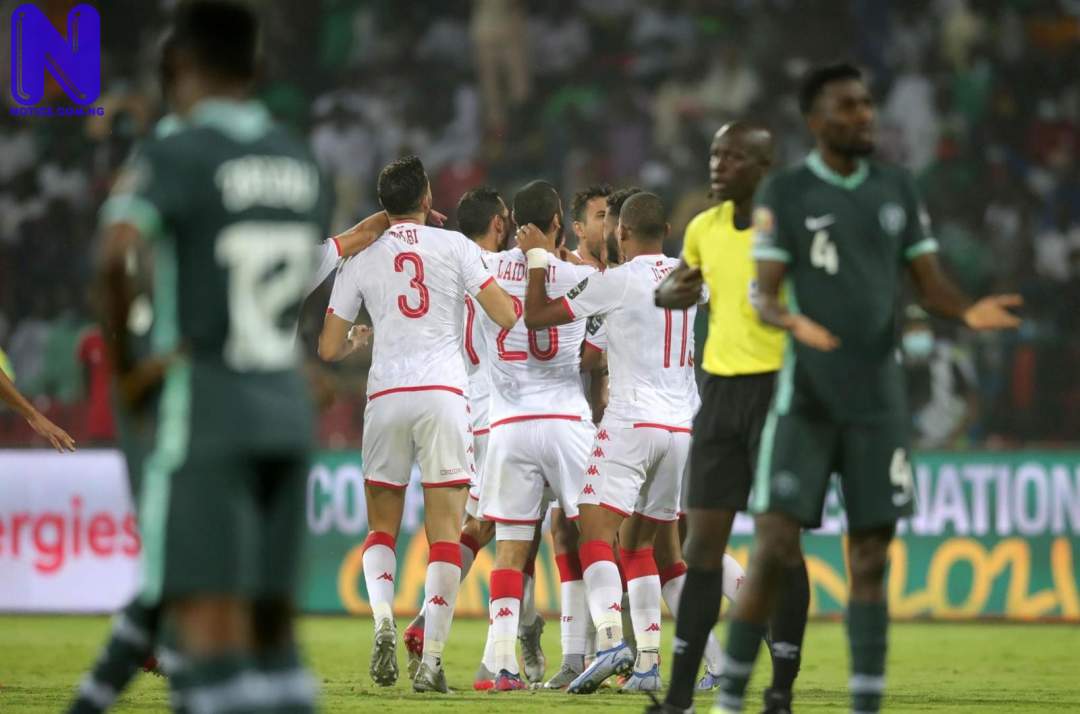 It all came scuttling down to a smoky rubble. And a stinging silence spread through expectant football fans on Sunday night.

This was not the script. It wasn’t supposed to happen.

The Super Eagles came into the encounter as the only team that , while the Carthage Eagles managed just one win and barely snuck into the knockout rounds.

So, of course, the three-time champions were favourites to win.

But Tunisia assistant coach, Jalel Kadri, didn’t get that memo.

Standing in for head coach Mondher Kabaier who contracted COVID-19, he set up the North Africans to shut down Nigeria’s wide players.

“We know Nigeria are very strong and very fast in the wings,” Kadri said at the post-match press conference.

“Today we came up with tactics to put pressure on the Nigerian wingers because they are very dangerous. And we also know they have difficulties when they lose the ball.”

Their tactical preparations yielded dividends eventually. Two minutes after the half-time break, Youssef Msakni unleashed what looked like a speculative effort, but goalkeeper Maduka Okoye fumbled it into his net.

Nigeria’s woes were compounded in the 66th minute, after Alex Iwobi was shown a controversial red card, just minutes after he came on as a substitute.

And at that point, there was no way back.

Knockout football at any level is brutally unforgiving.

"I think we had one bad match where we were outclassed tactically and lacked some good fortune too.

Babajide Guerrero, who is the first ever presenter on NPFL TV, says it all boiled down to overconfidence.

“No one wins a tournament at the group stage, you have to stay switched on for seven matches, if you do that you’d most likely win.

“Nigeria should be beating a full strength Tunisia side, let alone a side stricken with covid, we thought we won the game before the game was played,” Guerrero says.

Already, Eguavoen has stepped down from his role as interim boss.

“I will go back to my position and allow the NFF to make a decision on the way forward,” Eguavoen said behind the game.

Solace Chukwu, who used to report on African players for GOAL, argues Eguavoen has his share of the blame.

“I would say the biggest issue was a deficiency of tactical preparation.

“Nigeria lacked alternative avenues for chance creation and progression when their opponents shut down their major attack lanes, and the most telling aspect of it was that the manner in which Tunisia did was obvious even before the game started.

“It could have been preempted: anticipating the opponent’s reaction and using it against them is a staple of strategic thinking.

“Eguavoen showed his deficiency in this regard, and picked the worst possible moment to do so,” Chukwu explains.

Eguavoen stepped in after Gernot Rohr was sacked last month.

However, the NFF announced Jose Peseiro as the new permanent coach before the AFCON kicked off.

It is left to see if Peseiro will be the man to take charge, when Nigeria battle arch-rivals Ghana for a 2022 World Cup ticket in March.

“Losing at this stage is painful but we take solace in the great spirit with which the team approached its four matches in Cameroon, out of which it won three.

"The focus and attention will now shift to the FIFA World Cup qualifying play-off against Ghana in March. We want to assure Nigerian People that we will prepare even harder for those two matches to get the job done,” NFF president Pinnick vowed.